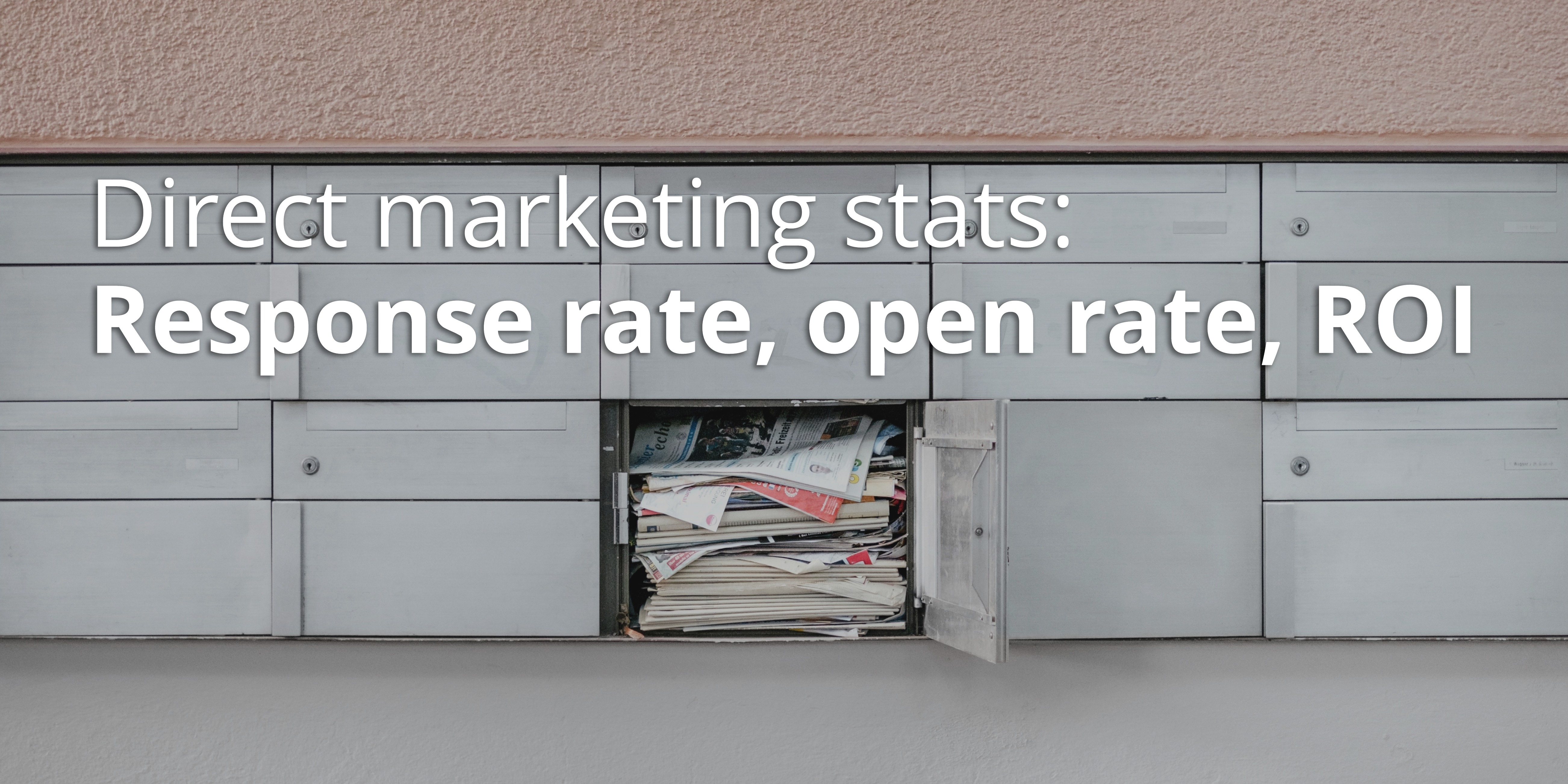 Direct marketing can be extremely effective for businesses focused on serving specific geographic areas. By sending letters, flyers, and other marketing materials straight to prospects' homes or workplaces, you can generate business in a cost-effective manner.

Direct marketing (also known as direct response) is an umbrella term that includes email, online display ads, paid search, and direct mail. The common denominators are 1) they target specific people and 2) they ask for some type of action.

The requested action could be anything from giving you a call or redeeming a coupon to scheduling a free consultation or starting a trial membership. The possibilities are limited only by the marketer's imagination.

In this post, we'll focus mostly on the time-tested technique of direct mail, which remains very profitable for realtors, gym owners, franchisees, and other businesses focused on serving local communities.

How can you measure your performance?

Let's discuss the key metrics of direct marketing campaigns. Understanding these is the first step to ensuring that your strategies are always improving.

When most people get their mail for the day, the first thing they do is separate the "junk" pile from the stuff that deserves their attention. Getting our messages into the stuff-to-open pile is the first hurdle direct mailers must clear.

How often does this happen?

Unfortunately, because we aren't in prospects' homes or offices with them, this is a difficult metric to track. Paper mail is a different animal than an email campaign, for instance, because email marketing software allows us to track how often our messages are opened and clicked.

It's unlikely you'll know what your direct mail open rate is. That said, prospects can't respond to a message they haven't read, so we want to do everything we can to increase it. That's why seasoned marketers test different variations of the same direct mail package. Seemingly subtle details—like the envelope color or the font of your prospect's address—can make a significant impact.

By sending out two versions of the same marketing message (a process called A/B testing), you can track which version performs best. After enough testing, the winning version becomes the "control," which you can test against newer variations. This ensures that you're constantly optimizing your direct mail packages to get opened as much as possible.

Let's say you're a realtor looking to build your client base in a new neighborhood. You decide to send out 500 letters introducing yourself and asking for interested recipients to give you a call. Your message is the same in every letter, but the envelopes are different. 250 are white. The other 250 are yellow.

You get 13 calls from the white group, but only 6 from the yellow: a statistically significant result. We don't know for sure how many people opened the envelopes, but because the response was so much higher with the white group, we can assume it's the better option moving forward. Next campaign you might test it against another color, like light blue.

The response rate measures how many prospects follow up after seeing your messages.

A response isn't necessarily the same thing as a sale. It often will be if you're selling inexpensive impulse items, like a pizza store owner mailing out coupons. In those cases, responding (using the coupon) is the same thing as becoming a customer. But that isn't always the case with more expensive products (like real estate), when people might respond before they're ready to buy.

How do you measure this?

The challenge becomes figuring out which prospects responded due to your direct mail as opposed to other marketing channels. Here are just a few strategies you could use to track response rates:

Don't worry if your response rate seems low. In 2017, the Data & Marketing Association's Response Rate Report found that the average response rates sent to houses was about 5.1%. The same report revealed that oversized envelopes had the highest response rates, probably because they stand out from the pile.

Imagine you own a hamburger restaurant. You decide to send out coupons to promote your new curly fries. You send out 2,500 coupons, and 175 people end up redeeming them. What's your response rate?

The formula is simple. All you have to do is divide the responses by the total pieces sent. In our burger example that turns out to be 7%—a great response!

Direct marketing can be extremely profitable, but there are certainly still costs involved. Everything from accessing mailing lists and databases to printing services, postage and the paper itself—these things add up.

Your marketing budget is limited. Tracking your results will ensure you're allocating every penny where it's most effective.

That's where ROI comes in. This acronym, which stands for "return on investment," assesses the revenue your campaign brings in relative to its cost. It's probably the most important metric to pay attention to because you can compare it with the results from other marketing efforts.

Say you're a gym owner offering a great deal for a new membership. You spend $6,000 on your direct mail campaign, which results in $7,800 of new business. You want to know your ROI.

Although many small business owners are overlooking direct marketing in 2019, it remains a viable strategy for businesses targeting local areas. You might use email, direct mail, pay-per-click, or all of the above.

Understanding the key metrics will help you see how well your campaigns are paying off. Continuing to track them while you experiment with messaging will ensure they're as profitable as possible.

Learn more about the new direct mail features in Lucidpress, and give it a test drive.

Corey Pemberton is the founder of Copy Arc. Plays with words so you don't have to. Believes in great stories, quality over quantity, and the simple things. Work hard, but play hard too. Stares at the clouds a lot.