The history of desktop publishing

From its roots in the Middle Ages, layout design has evolved significantly. What was once the provenance of monasteries spread to the office, and later, personal computers. The overarching goals of publishers haven't changed, though—to find an audience and communicate an important message. However, the nuts and bolts of desktop publishing are undergoing a revolution on par with the changes precipitated by Gutenberg. When planning your business's layout design strategy, will you be ahead of the curve? 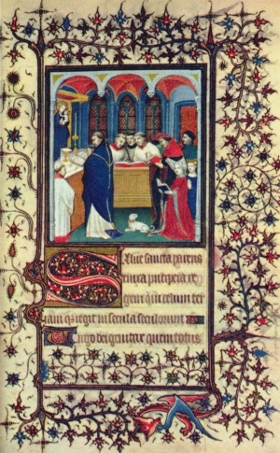 Early examples of beautiful page layouts can be found in medieval illuminated manuscripts. The work process of the manuscript creators sounds remarkably modern: they would plan the overall layout of the page, including the ornately decorated drop capital and the decorative border, then they would draw straight lines on the parchment or vellum where the text would go. The medieval publishers showed specialization in splitting the duties of the rubricators (who filled in the red text), illuminators (the illustrators—forerunners of today's graphic designers), and other scribes and artists. By the late Middle Ages, commercial scriptoria in cities were competing with the small-shop cloisters and monasteries.

From the story of illuminated manuscripts we can see the importance of advance planning in thoughtful layout design, and the inevitability of commercialization and mass production.

If you've ever looked for a public-domain book, you are probably familiar with Project Gutenberg. How did the Gutenberg printing press change layout design? By using movable type to expedite the printing process, a single press could produce thousands of pages per day, as opposed to a few hand-drawn copies.

During the post-Gutenberg era, some of the personalization of book layouts was lost. The use of two columns of justified text looks very modern. It lacks some of the opulent artistic qualities of the illuminated manuscript page. This era can be thought of the moment when word processing and layout design split into two distinct fields. This is still reflected in specialized programs, some aimed at text-based projects, and some more specifically aimed at visual layout design. 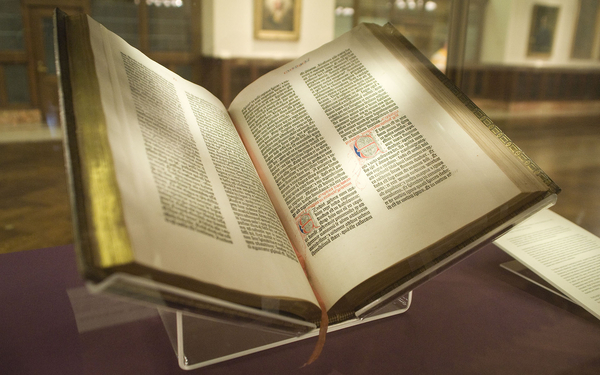 If you've watched a show set in the 1960s or 1970s, you know that "copy and paste" were once anything but metaphors. Before desktop publishing software, art directors, publishers, and printers physically designed their documents. Writers and journalists used typewriters, which evolved to electric typewriters, then standalone word processors. Many of the conventions of layout design were established during this period. The standardization of templates influenced the look of today's books, newspapers, and magazines, even though they're often consumed on different platforms.

Mid-century layout design shows that competing mediums for design can coexist. While this era saw innovation in design tools, traditional artists and printers were still part of the media landscape.

Thirty years ago, the arrival of "What You See Is What You Get" (also known as WYSIWYG) displays radically changed layout design. Arguably, this led to an initial decline in quality: without the ability to control kerning, letter-spacing, or font selection, the printed outputs from programs like Type Processor One or PageMaker were primitive, at best.

With each improvement in screen displays, processing memory, and style sheets, desktop publishing became a disruptive threat to traditional layout design. The swift evolution of WYSIWYG editors demonstrates the necessity of taking upstarts seriously—but of course, that's easier to see in hindsight!

Around the year 2000, the big names in desktop publishing—InDesign, Scribus, OpenOffice, Publisher, and Pages—rolled out their products. These are still major players in the professional market.

The quality of the output increased dramatically in this time period. As personal computers evolved to their now-familiar form, designers could control the digital page to look like the printed page. 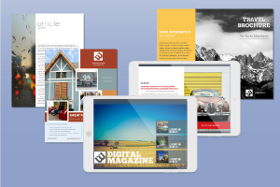 In the second decade of the new millennium, desktop publishing underwent another seismic shift. Rather than only license-based options, layout design software began a transition to the cloud. Some of the major players stopped offering their products à la carte, switching to a subscription model. Many print magazines and newspapers ceased publication, either shutting down or becoming web-only.

As internet connections became faster, browsers more reliable, and memory capacity increased, creators and consumers expected to be able to do more, to do it more quickly, and to do it better. As email became dominated by web platforms, word processing went to the browser (for example, with Google Docs), and tablets and smartphones introduced an explosion of apps, desktop publishing went to the cloud, as well.

Lucidpress is one of those sleek, cloud-based desktop publishing tools. With an easy-to-understand interface, auto-saving and web publishing, and deep integration with the applications that are a part of modern business workflows (Google Docs, Dropbox, and even Facebook), it's bringing layout design out of the sphere of specialists. You no longer need an advanced degree to create high-quality print and digital publications—nor do you have to break the bank on your design software suite.

The future of desktop publishing 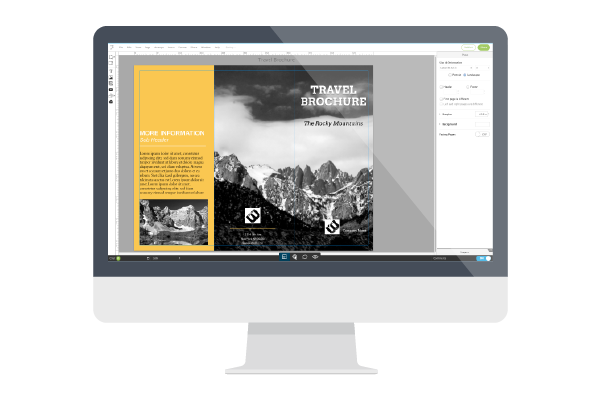 It won't be long until the notion of your layout design being tied to a single "desktop" will be as quaint as the idea of a monk cloistered away with his vellum, or a magazine made with actual glue. More designers use laptops, tablets, and cloud-based products than ever before. This space is opening up to the public.

Since the software-as-a-service (SaaS) landscape is changing so quickly, it's worth re-evaluating your business's needs. What documents do you need to design to connect with your customers? How many resources are you willing to expend on desktop publishing software? Do you need the ability to share and collaborate with your team? Are you creating brochures, letterheads, flyers, reports or eBooks to be distributed?