Finding your voice: How one nonprofit is reaching kids through hip-hop

Hip-hop and mentoring. It doesn't come to mind as fast as peanut butter and jelly, but Hip-Hop University is betting on it being a winning combo.

Hip-Hop University, based in North Carolina, is on a mission to improve the landscape of opportunity for local youth, and they do it through positive hip-hop culture.

Related: How to make a magazine in 12 steps

I had the opportunity to speak with Albert Carter, one of the co-founders of Hip-Hop University, after being impressed by the work of their organization. I was also intrigued by the monthly print and digital magazine they make in Lucidpress. He and I talked about Hip-Hop University's story and the ways they're using Lucidpress to build a great brand that has the power to change kids' lives for the better.

Hip-hop has been a part of Carter's life since he was young. "Growing up in one of the roughest neighborhoods in Philadelphia, I was in search of an identity that would make me appear cool while still being myself," he writes. "I found comfort in knowing that hip-hop was a place in which I could do just that."

So when Carter was looking to start a mentoring program that would be relevant and appealing to youth, hip-hop was a natural choice. With a lifelong background in hip-hop (including work as a rapper and manager) and years of mentoring experience, the combination just made sense.

Teaming up with his co-founder Reginald LaRoche, who he met in a mentoring program, Carter established the Hip-Hop University. 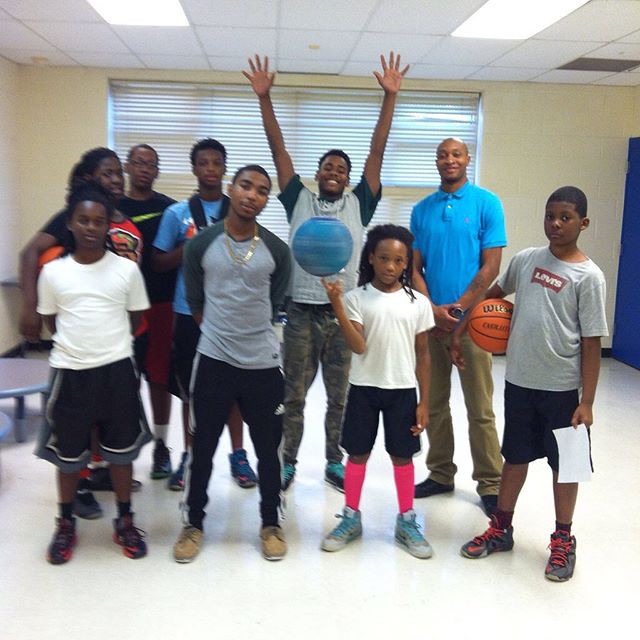 Today, Hip-Hop University is a successful nonprofit, nominated for Educational Leadership Program of the Year in 2015 and receiving coverage from a number of local news outlets. And that's not to mention all the kids that have benefited from a safe, positive place to learn and grow.

Growing up, Carter read a lot of hip-hop magazines. LaRoche and many of the board members of Hip-Hop University did, too. Naturally, they were excited about the opportunity to make one of their own.

But it wasn't just that. Two major goals of Hip-Hop University are to provide mentors and promote literacy. A magazine is a unique medium to do both. Through Hip-Hop University's in-person programs, local mentors work with kids face-to-face. A magazine makes it possible to have what Albert Carter calls "mentors from afar." National hip-hop artists with a positive message can mentor from anywhere in the country when their stories are featured in the magazine. 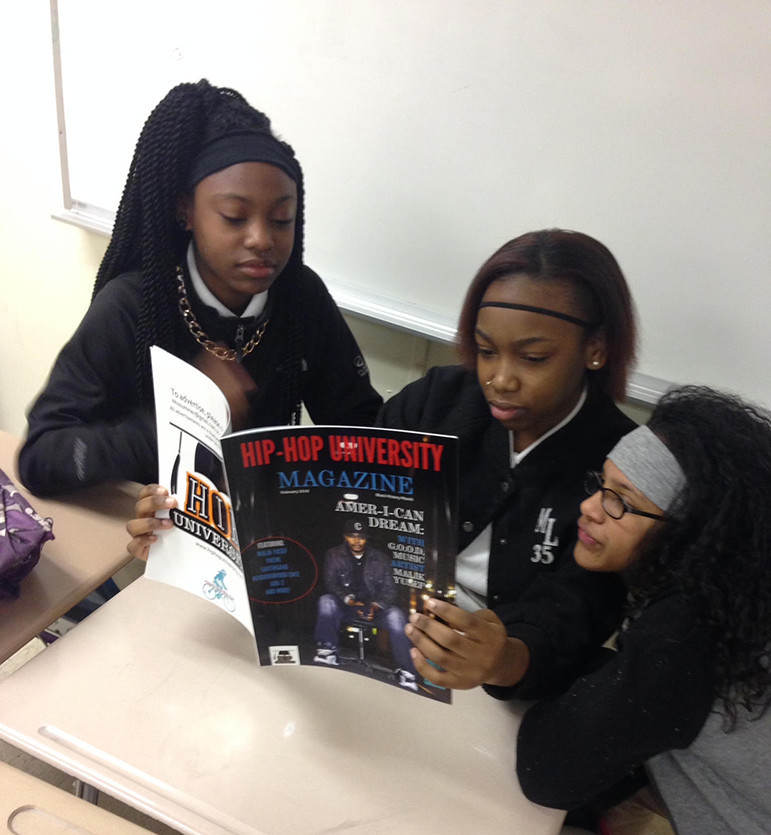 Along with mentoring from afar, promoting literacy happens naturally when kids read the magazine.

Sometimes literacy is specifically addressed in the content of the magazine. For example, a recent article titled "Kick the Phonetics" suggests a method in which struggling readers use the lyrics of their favorite hip-hop songs to expand their vocabulary.

Albert Carter sums it up by saying, "What better way to promote literacy and talk about hip-hop than through a magazine?"

You can check out the first issue of Hip-Hop University Magazine, which was made entirely in Lucidpress, right here.

Hip-Hop University determines what they'll put in their magazine based on the monthly theme. For example, March is Women's History Month and April will be Earth History Month, during which they'll address environmental issues.

These themes are covered in articles authored by a combination of staff writers and contributors from around the country. To find great articles from contributors, Hip-Hop University sends out an email blast to Hip-Hop University members nationwide, inviting them to submit content for the magazine. Some articles make it into the next month's magazine and some are reserved for future use.

Carter also told me that it's common for hip-hop artists to express interest in being featured in the magazine. Hip-Hop University often features these artists, but their one stipulation is that any artists featured in the magazine have to promote a positive hip-hop culture. That positive culture is a key part of Hip-Hop University's brand, one they're careful to maintain.

Once the content is in, Carter logs into Lucidpress to take care of the layout and design. His favorite part about Lucidpress is the templates.

"Kids love it," Carter says about the magazine. Students enjoy reading about an artist they dream about meeting or one they've actually met through the program.

But Hip-Hop University Magazine attracts readers from all age groups. Though their target audience is ages 11-25, research shows that their readership falls more in the range of ages 11-36. Not a bad problem to have.

Age aside, Carter describes their target audience as "the mentor and the mentee." They are writing for the students who are being mentored, but also for those who will be doing the mentoring. In this way, the magazine becomes a forum—a community—where artists, students and mentors can have a positive conversation. 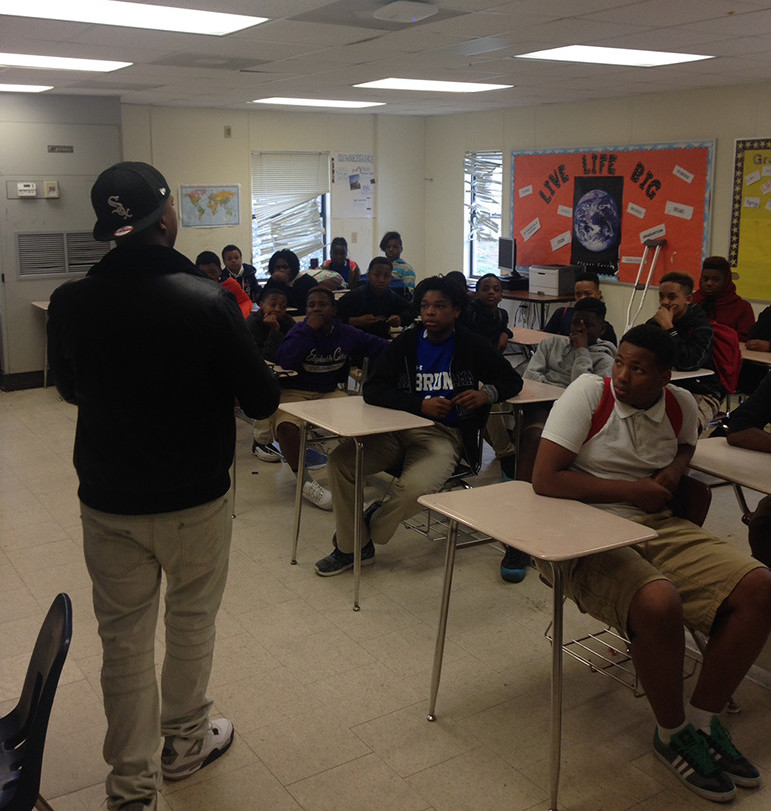 Since Hip-Hop University is a nonprofit that measures success based on the positive impact they have in their community, their metrics focus on the kids they're able to help.

The topics and articles in the magazine often spark conversations during the program, and the kids enjoy going home and telling their families what they're learning.

An impact that Carter feels particularly passionate about is the way the magazine helps homeless kids achieve literacy. Some members of Hip-Hop University's program are homeless and don't have access to books, so the copy of the magazine they receive is one of the few things they have to read. "They keep the magazine and read it at night," Carter tells me. He says it's heartwarming to see the magazine have such a powerful impact.

Hip-Hop University shows awareness of the key elements of building and maintaining a brand: they know their audience, they use a voice that their audience will relate to, and they put their members first, producing content that will be relevant and helpful to them. They're also careful to make their messages consistent.

The magazine is a key way of communicating and promoting these values and their brand. It could be considered "cornerstone content" for them. And like any great organization, nonprofit or otherwise, the ultimate aim of all this is to make people's lives better. For Hip-Hop University, that means kids with better reading skills, a positive place to learn, and mentors who empower them to achieve their dreams.

All in a day's work.

Ready to design your own magazine? These free magazine templates are a great starting point.

Jarom McDonald works as a content specialist on Lucidpress's marketing team. Outside of work, Jarom loves watching movies, occasionally watching birds, eating pizza, and driving a Prius (a vehicle he will defend passionately). Follow him on Twitter: @jarom2011.